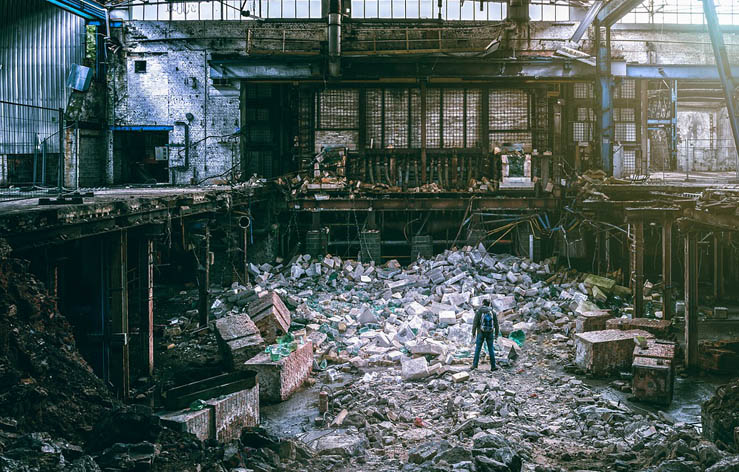 I don’t know who needs to read this today, but when you get hit with significant “unexpected change” it can feel like a freight train. So, what do you do!?

When something comes along and upends your world, it’s easy for intellect to go out the window, and for fear to set in.

Today, I want to share a personal story about how I encountered this fear firsthand. Not only was it terrifying on many levels, but it was also terrific.

It was the time when I grew the most and it was the catalyst that ultimately led to my financial freedom.

When the World Crashes Down

I had just come back from my lunch break when my boss pulled me into his office abruptly.

He said, “We’re going to have to do some terrible things that we won’t like this afternoon, but they need to happen… The company is going to lay off 2 dozen people this afternoon and we needed to be ready. It’s our job as the systems administrators to lock down their computers as they are notified. It’s not personal, but it is protocol.”

He promptly whipped out a yellow piece of paper with 20 names on it. As I started to scan this paper, my heart immediately sank.

I knew all of these names. They were my co-workers, and many were my friends.

But one name stood out from the rest… my dear friend, Tony. He had befriended me the very first day I arrived at the office and taken me under his wing. He was the one that showed me around and introduced me to the different teams in the company. We had just come back from lunch chatting and laughing about life’s silly moments.

4:00 pm rolled around and my phone started to ring. It was my boss and he said, “They’re going in now. Start locking down the accounts in 1 minute.”  I put my head down and got to work changing passwords and locking down their accounts. I felt horrible. I was like a vicious traitor stabbing my friends in the back. It only took 10 minutes to complete, but it felt like an hour.

20 minutes later, I looked up from my office to see Jenny, Cindy, and Tony slowly returning to their offices. Tony’s office was across from mine, so I could clearly see his drawn expression as he sullenly plopped down into his chair with a dazed look in his eyes.

And then it hit me. He had just welcomed his first child and purchased his first home a few months earlier. “What the heck would he do?” I pondered. His whole world had just been turned upside down.

He proceeded to try and log into his computer and realized he couldn’t get in. Defeated, he painstakingly began clearing his desk.  15 minutes later Tony slowly stood up and headed my way.

He was carrying a single banker’s box with a green cactus, some papers, and a small wooden picture frame of his wife and daughter.

“I’m soo sorry to hear that man. It’s been fun working with ya.” I replied awkwardly.

That evening I was lying in my bed staring at the ceiling. I rolled over to look at the clock. It was 3 am.

This was different. I almost always fall asleep when my head hits the pillow, but I couldn’t tonight.

My mind was racing. I was sweating bullets thinking about what if!

How would I survive? How would I take care of my fiance and start the family that we had just talked about?

What would my parents say? Would I be a failure?

Fear was eating me alive.

After hunkering down for a week, it came again… the next list of layoffs. Would my name be on this list? My heart was beating so quickly, and I could feel a lump welling up in my throat. But as I looked down, I realized I was NOT on the list. I had dodged another round.

But what about the next round? We had already laid off more than half of the company at this point.

In that instant, I heard a tiny voice in my head. “It’s in your moments of decision when your destiny is created.” (Tony Robbins)

And so that day I made one of the most important decisions in my life. I decided to stop letting fear control me and to take hold of my future.

That afternoon I called in a couple of my closest work friends into my office and asked them these critical questions, “Mike, do you want to wait and see who’s on the next round of layoffs? What about you, Brett?” “Heck NO,” they both agreed.  “Then screw it, let’s do something about it. Let’s start our own company and forge our own path.” I replied excitedly.

In that small moment of decision, a seed was born. And from this seed, an idea sprouted to create our own IT support company.

A few days later we had each scraped together $2000 to fund our start-up costs. We didn’t have any clients, and we certainly didn’t have any knowledge of how to start a business. Oh yeah, AND we were starting this up in the post 9-11 economic recession. The odds weren’t looking good!

Getting to Work & Taking Action

But here’s the thing. We put our heads down and got to work. We spoke to people around us, friends, family, and colleagues. Slowly but surely, we began getting clients. Word began to travel quickly and the clients that we had been serving with our prior employer heard that we left. Within a couple of months, a few of them came to seek us out. And we began to flourish.

Within a year my partners and I had already exceeded our previous incomes. We were also re-investing into the business and even acquired a couple of smaller companies to expand our book of business further. Our company remained profitable for the next 10 years and we were named one of San Diego’s fastest-growing businesses 3 years in a row. What started out as a slow-motion disaster turned out to be one of the biggest blessings. Who could have foreseen that a $2000 investment could create a 7-figure business and employ people beyond ourselves?

The reason I share this personal story is that many of you may be having your own personal crisis now.

I want you to know that it’s okay to be afraid.

Sometimes we need these dark and uncomfortable moments to move us closer to where we are intended to be.

And so, use this change as a gift to take ACTION.

We started up the company with a lot of odds stacked against us. And, when I think back on it, it wasn’t that we were oblivious to those odds.

It was that we decided to focus on what we could control and believed that we could bring value to the market place.

Once we got a little taste of success, we plowed that energy back into the company and started to pick up momentum.

YOU always have a choice. You can believe in your God-given talents and get flexible, or you can sit and complain. Which person are you?

Yes, there were many times along my path when I wanted to quit. But, I also knew persistence was the key to unlocking success. It’s why most people “fail”. The cease to keep trying.

So it’s imperative to know your outcome so that when change hits, you don’t veer from the outcome. It’s okay to be flexible with your approach, but if your outcome is clear, it’s much easier to make decisions.

Haven’t your best accomplishments in life come from adversity and persistence?

I kept in touch with Tony over the years and he eventually picked up another position. This took him out of state where he was able to be closer to family. So, things eventually worked out for him too.

Now I know why people would always say that “change is the only constant“. It’s true.

So let me ask you some key questions that I ask my coaching clients.

When change comes your way, what will you do?

Will you lean into faith, take action, and serve others tirelessly?

The choice is yours. Stay blessed.

Readers, what “unexpected changes” in your life (today or past) have shaped your life? How do you approach change now?

One Comment on “The other side of unexpected change is opportunity”